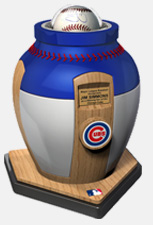 Nothing quite goes together like baseball and fiery incineration, I say. That would explain the licensing agreement just signed between Major League Baseball and Eternal Image Inc., a company which produces caskets and urns. Now that’s co-branding. The scary thing is I know they’ll sell. While I wouldn’t expect there to be a lot of requests for stuff with the Devil Rays’ logo on it (although that may turn out to be a hit with the Satanists), I know more than a few people likely to want those for a lot of other teams. Yankees, Red Sox, Cardinals … the list does go on. Cubs fans probably won’t be so interested though, they’ve already spent one eternity waiting to see their team rise again.*

However, there are far worse things than being buried in MLB copyrighted logos and colors. Eternal Image also a licensing agreements with Hallmark’s nauseating Precious Moments line. It would be like being buried in a Kewpie Doll. Still, that might be preferable to wearing Yankee pin stripes until the Second Coming or the heat death of the universe or whatever else you believe in. Eternal Image also has deals with the American Kennel Club and The Vatican Library Collection.

*FWIW, Mrs. Collateral Damage and I would like to invite you to a party we’ve been planning. It’s for sometime in the summer of 2008 and will be marking the centennial of the Cubs last winning the World Series. The exact date has yet to be determined because it will be on whatever day the Cubs are mathematically eliminated from play-off contention. While there are many who rightfully think we could hold the game on opening day, Mrs. CD is a stickler for accuracy and so we will wait until a little later in the season. This of course pre-supposes the Cubs will manage to not win (or even appear in) the Series in the next two years. A risk I’m willing to take.