Won’t the octopi get hurt?

TOKYO (AFP) – Animal rights activists on Tuesday urged Japanese baseball stadiums to give up their usual fare of hot dogs and fried octopus balls and go vegetarian to fight global warming. Japan’s baseball commissioners announced as the season opened last week that the national pastime would take action to reduce greenhouse gas emissions, in particular by speeding up games. But People for the Ethical Treatment of Animals (PETA) said it would be more effective for concession stands to serve exclusively vegetarian fare.

When will PETA start speaking up on behalf of the endangered Tofu?

I would like to commend the Japanese baseball league for making game lengths an environmental issue. I hope MLB follows suit. Anything to speed the games up.

9:29 AM — Manny puts Sox ahead 6-4 in the 10th. They should play more games with a 13 hour time difference. I like watching baseball over breakfast. 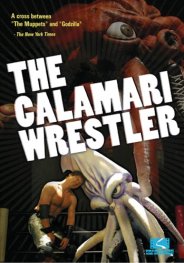 And speaking of Japan & cephalapods: Got to watch the Japanese movie Calamari Wrestler last weekend. BRILLIANT! Plot: A dying pro-wrestler is cured by monks. Only drawback: cure turns him into a squid. He resumes his life as a pro-wrestler. Also resumes his relationship with his girlfriend. There are so many hysterical scenes it is hard to pick a favorite but I especially loved the one where the happy couple are skipping down the street hand-in-tentacle. It has special effects on a par with early Dr. Who and a truly wonderful campy humor. The Times quote on the box sums it up perfectly: “A cross between The Muppets and Godzilla.” Which is also a great idea for the next Muppets movie.