This year marks the 30th anniversary of the introduction of the 2nd greatest video game ever (Ms. Pac Man is #1 4EVAH). We here at Collateral Damage take Space Invaders very seriously. In part that’s because I’m in awe of the amount of time and quarters I wasted devoted to it. In part it’s because it reminds me of the time back when I didn’t have to put up with uppity young punks because I was one. Hence the official logo of the Collateral Damage mobile:

(If you are interested in doing the same to your car or walls the stickers may be found here. Be prepared for a bit of attention if you put them on the old gas guzzler.)

Fortunately the rest of the world seems to share my fascination. Herewith a few of the more interesting things I have come across that pay homage to our Space Invader overlords. So in honor of the 30th Anniversary of the

We will begin with apparel (and skip over the entire t-shirt aisle — cuz there’s a zillion of those).

You can get this underwear: 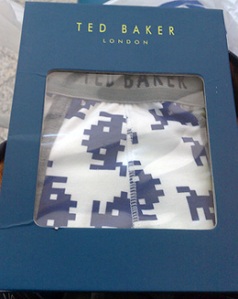 The solid plastic pendent ($46 but that’s Australian, so who knows what it is in real money. And by real money I mean Euros.):

Or these necklaces which are made of wood and a deal at all 3 for $50 in deflated US dollars:

Or for more formal occasions there’s a choice of ties.

Or a bowtie, if you are David Churbuck:

For some reason you can get them as cufflinks. You can get cufflinks shaped like pretty much anything but WHO THE HELL WEARS SHIRTS THAT NEED CUFFLINKS?

However, many people do still wear rings: 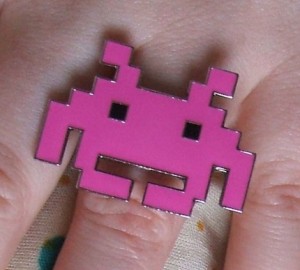 As it gets cold you may want a scarf:

Or the one I lust after:

Or a comfy hat:

Or the beer cozy (The perfect gift for that Britisher in your life who likes it at room temperature):

And what, I ask you, could possibly be geekier than a Space Invaders fanny pack? 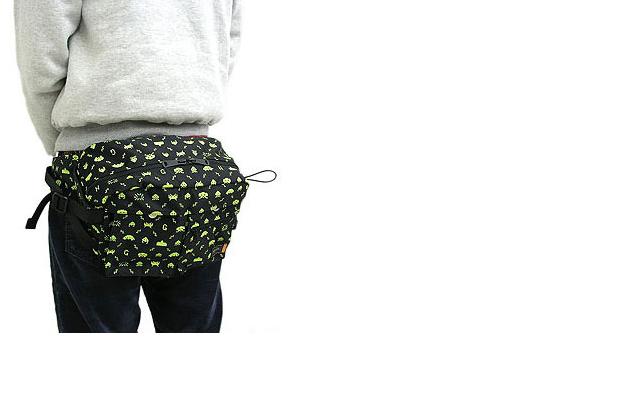 Moving on to home furnishings, now.

Or the only thing that’s nearly as gorgeous as the rug, a butcher block table.

OK, it’s sold out but it’s done by the same guy who did the wood necklaces and somehow I think the necklaces are more in my price range.

7 thoughts on “Happy 30th to those neverending Space Invaders”