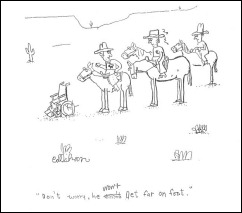 I doubt there has ever been a cartoonist who combined sick, twisted and funny as well as John Callahan. Callahan – quadriplegic and alcoholic – was totally without fear when it came to finding humor in a situation. Callahan, who died yesterday at 59, had a drawing style that could at best be called unschooled. If your 6-year-old drew this badly you would take him or her for physical therapy. Yet his horrid drawing, like Bob Dylan’s horrid singing, was the perfect instrument for his perverse muse.

The drawing shown here is one of his classics and also provided the title for his brilliant 1990 autobiography which tells you more than you want to know (and is also the bare minimum you should know) about life as a quadriplegic.

Here are descriptions of his cartoons from Gene Weingarten’s great eulogy in the Washington Post:

As Weingarten puts it (and really – stop reading this, click on the link and read the damn thing, it’s great):

Typically, Callahan’s humor was judged against the backdrop of his disability — he was, in effect, given a pass for what would be considered tasteless if done by anyone else. He objected to that, and for good reason. Callahan’s genius — and it was genius — may have been informed by his disability, but it was not dependent on it or beholden to it; Callahan’s work needed no special accommodation for the handicapped, and to suggest it did is a disservice to him and to humor itself. Callahan’s crippled characters were stand-ins for all of us; he saw all of humanity as being lame — disabled by prejudice, by sanctimony, by vainglory, by small-mindedness, by self-absorption.

It’s no surprise to learn that his cartoons garnered a lot of hate mail, which he clearly loved as a lot of it is republished on his website. One sample: “In a recent edition of The Riverfront Times, you printed a cartoon depicting a square dance as an "Alzheimer’s Hoedown." Several our family caregivers of AD victims contacted our office to voice their outrage at your insensitivity.” Callahan believed everyone should be able to share in the gallows humor for any group. He took jokes which could usually only be shared between people afflicted with a condition or caring for those people and made them public. He did much more than that but even if that was all he had done he would have contributed a lot.

Let me end with this tagline from Callahan’s website: when you’re done laughing at the maimed, sick and unfortunate visit our foolish sponsors