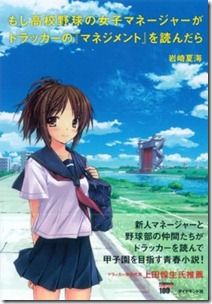 The series is an animated adaptation of Natsumi Iwasaki‘s business novel Moshi Kōkō Yakyū no Joshi Manager ga Drucker no Management o Yondara which translates into "If A Female High School Baseball Team Manager Read Drucker’s ‘Management’…" The original book has sold 1.3 MILLION copies in J-land. The novel is about

<<Slaps self in head>>Why didn’t I think of writing that?

Because that title is a bit long, the anime will be known as Moshi-dora [もしドラ]. Moshi-Dora is such a phenomenon that its title is #32 on a list of the year’s Top 60 Japanese words and phrases. (In case you were wondering, #1 is “~zeyo!: One symptom of this year’s widespread Ryōma Sakamoto fever is the tendency to emulate the 19th-century samurai’s Tosa dialect by finishing sentences with an emphatic ~zeyo!” I want to live in a nation that gets this obsessed with an 18th century revolutionary. Anyone care to join me in creating a pop-culture movement about Garibaldi? Don’t all hold your hands up at once, now.) Here’s a link to the official website which Google offered to translate and, when I clicked yes, rendered the page in Kanji.

Below is the promotional video. My ignorance of the Japanese language didn’t impair my enjoyment at all.

I’m going right out and buying the animation rights for Who Moved My Cheese and The 7 Habits of Highly Effective People.

I’ll be damned if this isn’t the weirdest thing to come out of Japan since Calamari Wrestler.