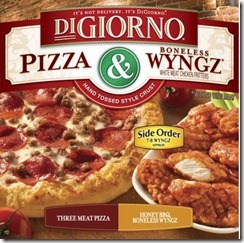 Well, probably not. But it’s up there, that’s for sure. As Steven Colbert explains, the name is the result of a horrible combination of Federal regulation and Kraft’s desire for something trademarkable™. According to the Feds, if a “wing-shaped” or “bite-size appetizer product” doesn’t contain any “wing meat” it cannot be labeled as a “chicken wing.” And Pizza and Nuggets sounds like a kids meal. Memo to the fine folks at Kraft’s marketing department: You really didn’t need to ™, ®, or © the name. No one else will ever use it.

Here’s another issue: How do you order one of these? (We’ll leave the question of why for another day.) Is it a Wyng™? Or is Wyngz™ itself the singular and the plural is Wyngzes™? Also, these are described as “boneless Wyngz™.” Does that mean there is a version with a Wyngz™ bone still in it?

For most businesses this would have just been another horrid example of sex sells. For AmAp it seems to have been a reflection of CEO Dov Charney’s “issues.” Charney, who took most of the pictures of company employees used in the ads, was the defendant in so many sex-harassment law suits that you couldn’t keep track of them.The wonderful practices didn’t stop there – no surprise. AmAp was also accused of firing employees who weren’t attractive enough and, Gawker reported that,

Charney "made store managers across the country take group photos of their employees so that he could personally judge people based on looks. He is tightening the AA ‘aesthetic,’ and anyone that he deems not good-looking enough to work there, is encouraged to be fired."

Happily Charney’s management style seems to have come back and bitten him in the ass. Today the Times reported that the company’s woes continued as it raised "substantial" doubt about its ability to continue as a going concern and warned it could breach a loan covenant, sending its shares down 22 percent to a lifetime low. This follows a Federal inquiry into AmAp finances which was spurred when the company’s auditor quit after warning of problems with the company’s financial reporting and the reliability of the company’s financial statement for ‘09.

It took some time but Sichuan Tengzhong Heavy Industrial Machines Co. finally realized what a bad idea buying Hummer would be. Yesterday the Chinese company announced it was pulling its offer to purchase the brand. From the start, the attempt to dump Hummer has been another testament to the company’s ineptitude. GM began trying to sucker someone into paying for the brand in June of 2008 – when gas was averaging $4.10 a gallon.

The Hummer’s greatest success may be as a metaphor for the past decade. It was a bloated, self-indulgent vehicle with no purpose other than to say, “Look how much debt I can take on just to show off how much debt I can take on.”* It proclaimed a belief that markets never go bad, in this case that gas will always be cheap. However it isn’t much of a stretch to say a similar belief permeated the minds who thought real estate could only gain in value.

The Atlantic is floating the scary idea that Hummer may not yet be dead and that someone may yet come along and revive the monster. Get the pitchforks and torches! Let us storm the castle and cut off the beast’s head and drive a stake through its transmission! For capitalism’s sake, follow me!

*I know there are farmers and others who actually used the damn thing for work purposes, they are exempt from this metaphor. 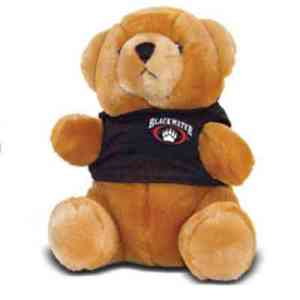 Blackwater Worldwide — the “security” firm known for its employees shooting at least a dozen Iraqi civilians — is trying to rebrand away its notoriety. It will henceforth be known as Xe. That’s pronounced zee, as in “zee idiots in marketing thought of it.”

Blackwater president Gary Jackson said in a memo to employees the new name reflects the change in company focus away from the business of providing private security. “The volume of changes over the past half-year have taken the company to an exciting place and we are now ready for two of the final, and most obvious changes,” Jackson said in the note.

One of those changes probably has something to do with getting out from under those damn subpoenas. Hopefully rebranding means there will be a sale at the Blackwater USA Pro-Shop (not making it up). Although at $10 each it’s hard to get a better deal than these adorable teddy bears. Just the thing for your favorite toddler!

The words “war on terror” will no longer be used by the British government to describe attacks on the public, the country’s chief prosecutor said Dec. 27. Sir Ken Macdonald said terrorist fanatics were not soldiers fighting a war but simply members of an aimless “death cult.” The Director of Public Prosecutions said: ‘We resist the language of warfare, and I think the government has moved on this. It no longer uses this sort of language.” … His remarks signal a change in emphasis across Whitehall, where the “war on terror” language has officially been ditched. Officials were concerned it could act as a recruiting tool for Al Qaeda, which is determined to manufacture a battle between Islam and the West.

NO WAR ON TERROR? But what brand will you use to scare the electorate with????

Next time you’re in Omaha, Nebraska, take a quick stop by the corner of 129th & Q. There you will see the first location of Terror Free Oil, a new company that promises to only sell “Oil that does not come from the Middle East (Persian Gulf) or other countries whose regimes and/or populations are hostile towards the United States and its allies.” Which basically means the US and Canada, unless the Canadians get uppity. (Why do I think that for most of us the phrase “terror free gas” means it sells for less than $2 a gallon?)

Should you not have the fortune of living in Omaha but still wish to avoid terrifying gas, the TFEC maintains a list of oil companies that it believes only buy domestic dead dinosaur. These include Hess, Sunoco and a wonderful brand that I didn’t even realize was still with us: Sinclair.

I’m not sure exactly how you discern the provenance of petroleum. Does the 2007 Alaskan Sweet Crude really taste different than the same vintage from the Mid East? The TFEC itself admits that it can be difficult to make sure all their gas is devoid of corruption: “Oil is a fungible commodity, and gasoline from the international community gets mixed into the pipeline.” That said they do buy all their gas from Sinclair which the Dept. of Energy says only uses home brew.

Doing some driving abroad and want to top off with Good Guy Gas? In Brazil it’s safe to use Petrobras. Oddly, Yukos has also received the TFEC seal of Clean Living. Are we talking about the same Yukos that the Russian government basically took over? I don’t mean to speak ill of an ethnic group I’m descended from, but if Yukos isn’t paying off terrorists and mobsters to do business then they are the only such business in The Motherland.

Also, if this seems like an incredible business opportunity TFEC is offering the most reasonable franchise opportunities I’ve ever seen. Franchise fee: $1. In addition to only selling Good Guy Gas, franchisees must donate 1% of revenues to a counter-terrorism organization. Dibs on the CIA!

Google, as you may recall, has the following two items in its 10 points of corporate philosophy: “Democracy on the web works” & “You can make money without doing evil.” Observers didn’t realize these were meant to be ironic until the company began kowtowing to the Chinese government and censored their search results there.

Now, in yet another effort to throw yet another fig leaf over their corporate brand they have announced the following effort for Banned Books Week:

To Kill a Mockingbird. Of Mice and Men. The Great Gatsby. 1984. It’s hard to imagine a world without these extraordinary literary classics, but every year there are hundreds of attempts to remove great books from libraries and schools. In fact, according to the American Library Association, 42 of 100 books recognized by the Radcliffe Publishing Course as the best novels of the 20th century have been challenged or banned. Google Book Search is our effort to expand the universe of books you can discover, and this year we’re joining libraries and bookstores across the country to celebrate the 25th anniversary of Banned Books Week – a nationwide initiative to help people learn about and explore banned books. You can start by browsing these 42 classics – books we couldn’t be more pleased to highlight. — Google press release.

And the irony flowed like herring. Hey, can someone ban The Da Vinci Code? Cuz it’s terrible.

I’m looking for a graphic for the Penguins. Anyone care to suggest or submit one? There’s a free T-shirt in it for you. (At right, our first submission from Mr. Impatient. Thanks, Mr. I!)

Or more on why Marvel & DC Comics both suck. When last we heard from our dastardly duo they were trying to trademark the word superhero. But now quoth the Wall Street Journal: In July, Time Warner Inc.'s DC Comics, home to characters such as Batman and Aquaman, is launching "Rush City," a six-part miniseries that boasts visible promotional support from General Motors Corp.'s Pontiac. As part of the series, a new hero known as "The Rush" will be prominently featured driving a Pontiac Solstice in the comic book. … Over the past few months, Marvel Entertainment Inc. has begun putting the "swoosh" logo from Nike Inc. in the scenes of some of its titles, such as "New X-Men."