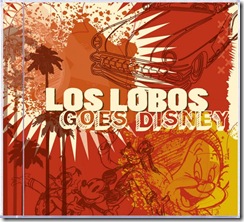 That is not a slight on one of my all time favorite bands* but the title of their latest release. On it they cover Roger Miller’s masterful “Not In Nottingham” (from Robin Hood), Randy Newman’s “I Will Go Sailing No More” (from Toy Story) as well as other great music from The House of Mouse. (And to think I scooped Mrs. CollateralDamage – who writes the Disney focused blog Broke Hoedown – on this. WOOT!)

This is not the first time that “Just Another Band from East LA” has done the Mouse. On the great compilation Stay Awake they performed “I Wanna Be Like You” from The Jungle Book, which was recorded for the movie by the great Louis Prima (and is included on LLGD). I bought Stay Awake on vinyl back in the day (1988) and highly recommend getting the CD. It also has Sun Ra (!!!) doing “Pink Elephants On Parade” and Tom Waits’ version of “Heigh Ho (Dwarf’s Marching Song).”

Stay Awake was one of several odd and wonderful compilations that came out around then. The other one I have is “Lost In The Stars: The Music of Kurt Weill” (1985). While it does have Sting doing “Mack The Knife” this is more than balanced out by the other tracks including Lou Reed’s “September Song,” Stan Ridgeway (of Wall of Voodoo) does a sublime and terrifying version of “Canon Song,” Marianne Faithfull’s exquisitely ragged “Ballad of the Soldier’s Wife,” Todd Rundgren doing “Call From The Grave,” and many other great ones. It’s out of print, which is a shame, and used copies are selling for $23 and up. C’mon over to my house and I’ll play it for you for free.

*In the ‘80s when people would refer to U2 as The Greatest Band In The World all I could ever think (and sometimes said) was “Did Los Lobos breakup?”

So Chinese New Year was last month but … here are a few ways in which Communism vs. Capitalism vs. Superstition is working out in the most populous nation on earth.

If you don’t count Collateral Damage Jr, that is. Mrs. CD grew tired of waiting for me to post her insights into The Mouse That Roars (Disney) and has started her own blog on just that topic called Kitty Chan’s Broke Hoedown. (To understand the title go here.) But before she went (without two weeks notice, I might add) she left a few more very funny observations:

Apropos of nothing, which is only fitting given your blog…

And it’s got a nice logo, too. She made it herself she did.