Last week, the kreme hit the fan when 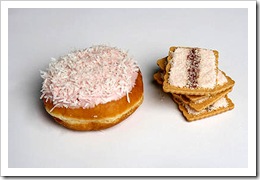 An Australian biscuit company has threatened legal action against US chain Krispy Kreme if does not stop selling its Iced Dough-Vo doughnut. Arnott believes the product is almost identical to its own Iced Vo-Vo biscuit, and breaches trademarks registered in 1906.

Krispy claimed the confection was meant as a tribute to the beloved Vo Vo.

This resulted in some of the best headlines I have ever read:

What about: Krisp Kreme donut turns to humble pie

As you can tell the Aussies take their Iced Vo Vo’s very seriously: In his November 2007 victory speech, Prime Minister Kevin Rudd jokingly urging his campaign team to have a strong cup of tea with an Iced Vo Vo before getting to work.This reportedly led to skyrocketing Iced VoVo sales, prompting Arnott’s to send a shipping pallet of the biscuits to the Prime Minister’s office in Canberra’s New Parliament House.

At issue is a decision to refuse free doughnuts, pies and bread that were being donated to senior centers around Putnam County, north of New York City. Officials were concerned that the county was setting a bad nutritional precedent by providing mounds of doughnuts and other sweets to seniors.

The Mobile Press-Register reports that a local Krispy Kreme posted a memo on Mardi Gras with the following: “Uniformed personnel are given 2 dozen glazed doughnuts and coffee or a fountain drink free of charge.” Should that not be enough additional doughnuts were available at a reduced rate, and discounts were also given to uniformed military personnel.

While it was a very sweet (ouch) gesture on the part of the local Krispy, isn’t that a little akin to offering free drinks at an AA meeting?

Over in the comments section, TotalTransformation suggests that this is part of a brilliant plan to aid criminals by making sure the police stay out of shape. I disagree as these were probably Kripy’s new “100% whole wheat doughnut — with only 180 calories.” Not only are these healthier but the mere thought of a whole wheat donut makes me think they would have to give them away.

“Buzz Donuts™ and Buzzed Bagels™ are the brainchild of Dr. Robert Bohannon, a molecular scientist living in Durham, NC. Dr. Bohannon has developed a way to mask the normal bitterness of caffeine so that it can be used in food and pastry products such as bagels and donuts.”

Homer is right! There isn’t anything donuts can’t do.