“It’s in the best interests of taxpayers to have Jamie Dimon running J.P. Morgan. They should want to have the best people out there running these banks, and I’m not sure capping pay is the way to do that.” – Jeffrey Immelt, CEO of GE, on President Barack Obama’s proposal to cap pay for executives.

Hard to know what the CEO of a company that has lost 2/3rds of its share value in 12 months means by “best people.” Certainly Dimon looks good in comparison to Immelt. JPMorgan is down slightly less than half over the same period. Still I think it is in the taxpayers best interest to pay as little as possible for incompetence of this magnitude. George Bush, after all, was paid a mere $200,000 a year.

Compensation numbers can be found here.

During the pet-food-poisoning scandal it was revealed the only difference between many top-shelf brands and their down-market competitors was the labels. I believe the same principle can be applied here.

How about this for a sign: “Will wreck your business for food.”

In a case that pitted an International Brotherhood of Electrical Workers union local against a central Jersey town, the high court ruled unanimously that the rodent is protected speech under the First Amendment.

This should come as particularly good news to…

Great quote: The state Supreme Court found that the law wasn’t neutral, and therefore was unconstitutional. It said an ordinance “that prohibits a union from displaying a rat balloon, while at the same time authorizing a similar display as part of a grand opening, is content-based.”

Besides, aren’t rats the state animal of New Jersey?

RELATED? Bangladesh crowns champion rat killer. “DHAKA (AFP) – A poor farmer from northern Bangladesh was crowned the country’s rat killing champion on Thursday with a final score of 39,650 dead rodents after a year-long hunt.” That’s a lot of bankers. 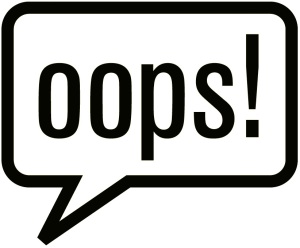 In the weekly question and answer session in parliament, [UK Prime Minister Gordon] Brown said there needed to be agreement “as a world on a monetary and fiscal stimulus that will take the world out of depression.”

Brown’s spin doctors immediately said it was a slip of the tongue by the PM.

I think his comments were taken out of context.

How should  BlackBerry to thank the President for the amazing product endorsement without just mailing him a large check. How about endowing a scholarship (or 10) in his name? That’s a start. Whatever they do the following companies should really do the same.

1) Beanie Babies that lie: Doll-maker Ty must think they are a bank. They have decided to lie about the fact that they’re new dolls — named Sweet Sasha and Marvelous Malia — are actually ripping off the Obama kids.

“[We] chose the dolls’ names because “they are beautiful names,” not because of any resemblance to President Obama’s daughters, said spokeswoman Tania Lundeen. “There’s nothing on the dolls that refers to the Obama girls,” Lundeen said. “It would not be fair to say they are exact replications of these girls. They are not.”

A moment of sympathy for Ms. Lundeen, who had to deliver that line with a straight face. Some PR folks do not get paid enough.

Ty is offering up this bizarre claim because public figures have legal rights to controlling the use of their images. The company’s only hope to get away with this is that the President is too busy saving our asses to notice. I’m not an attorney (to put it mildly) and I could win this one. Guys make it easier on yourself and just start donating all income (not profits) from these to a non-profit.

2) I’ll (Soft) drink to that: Thankfully neither Jones Soda nor Avery Soda are pretending their two flavors are anything but an attempt to get the President’s name on to their product. 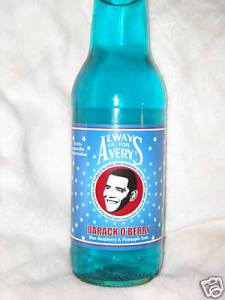 For harder stuff you’ll have to go to Kenya where the President lager has replaced the Senator brew previously available. Oddly, considering this is our first president to admit inhaling pot no rolling papers yet. Obama Bombers, anyone? 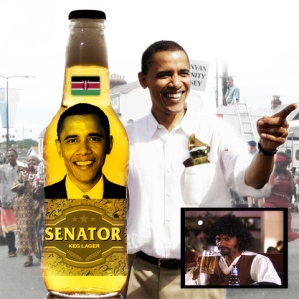 Continuing down the beverage aisle there are also a number of Obama coffees. This is my favorite because of the box.

3) Oooooh that smell: There is now a “fragrance you can believe in.” Best part of the product is the ad copy

Is it better to insight or incite? I dunno? (BTW, POTUS is short for “President of the …”) 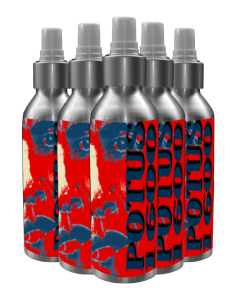 (And I have to say I am disappointed to be the first person to use Eau Bama. C’mon people!)

4) In the running: All basketball stars love to have their own sneaker, and sneaker companies love when a basketball star sells their sneakers. So what is more approporiate for our Power-Forward-In-Chief than …

Worth noting that this sneaker would be considered a deadly insult to the President in many cultures. But can we get a pair to our favorite shoe-thrower?

If you would rather not have him on the sole of your shoe, try these: 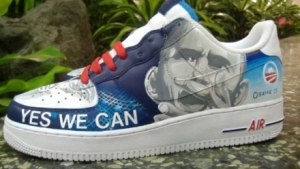 5) The President helps out around the house: This is my favorite combination of slogan and product — even though I cannot think of the last time I actually used a can opener.

There’s a lot of opportunities still untapped here. How about Obama baby wipes — “when you need change and got stuck cleaning up a big mess.”

From my latest at BlownMortage:

Société Générale expects the United States’ economy  to enter a depression and that China’s economy in in danger of  imploding. Albert Edwards, an analyst for the European financial services giant, wrote:

While economic data in developed economies increasingly reflects depression rather than a deep recession, the real surprise in 2009 may lie elsewhere. It is becoming clear that the Chinese economy is imploding and this raises the possibility of regime change. To prevent this, the authorities would likely devalue the yuan. A subsequent trade war could see a re-run of the Great Depression.

If this sounds apocalyptic it is at the very least a needed antidote to the incessant whistling-past-the-graveyard we are hearing from so many other official sources. My current favorite comes from Philly Fed Chairman Charles Plosser:

I expect the housing sector will finally hit bottom in 2009 and the financial markets will gradually return to some semblance of normalcy.

Plosser also says he  doesn’t expect uneployment to hit double digits. While I am not certain Mr. Edwards is right, I would happily bet my next mortgage payment Mr. Plosser is wrong.

One of these is certainly to be a nominee for the worst prediction of the year awards.

“What’s so intriguing these days, whether you work on Wall Street or in Wal-Mart is that it has absolutely become chic to be cheap. It’s all about price. Factors like quality, selection, store location and customer service are taking a back seat. We believe this will continue for the foreseeable future.” — Tracy Mullin, president National Retail Federation.

Ms. Mullin is now the front-runner to be named Secretary of The Obvious.

The UK’s Adertising Standards Authority has been asked to rule on a campaign by an atheist group featuring signs that read, “There’s probably no God. Now stop worrying and enjoy your life.”  (Note: the action part of the message works just as well if you replace “no” with “a”.) The campaign from the British Humanist Association has been challenged by a group called Christian Voice on the grounds it  breaks rules concerning substantiation and truthfulness.

The ASA’s code states “marketers must hold documentary evidence to prove all claims”. The regulator said it would assess the complaint and decide whether to contact the advertiser.

Stephen Green, national director of Christian Voice, said: “There is plenty of evidence for God, from people’s personal experience, to the complexity, interdependence, beauty and design of the natural world.  But there is scant evidence on the other side, so I think the advertisers are really going to struggle to show their claim is not an exaggeration or inaccurate, as the ASA code puts it.”

Hanne Stinson, chief executive of the British Humanist Association, said: “I am sure that Stephen Green really does think there is a great deal of evidence for a God (though presumably only the one that he believes in), but I pity the ASA if they are going to be expected to rule on the probability of God’s existence.”

Once it hands down this ruling I want the ASA to get to the bottom of the whole Mac or Windows thing.

There is a fascinating mea culpa from David Lereah, former chief economist with the National Association of Realtors, at CNNMoney.

Q. Were you wrong to be so bullish?

A. I worked for an association promoting housing, and it was my job to represent their interests. If you look at my actual forecasts, the numbers were right in line with most forecasts. The difference was that I put a positive spin on it. It was easy to do during boom times, harder when times weren’t good. I never thought the whole national real estate market would burst.

Q. The NAR’s latest forecast calls for a slight increase in home prices next year. Thoughts?

A. My views are quite different now. I’m pretty bearish and have been for the past year and a half. Home prices will continue to drop. I think we’ll see a very modest recovery in sales activity in 2009. But we’ve still got excess inventories, a bad economy and a credit crunch that will push prices down further, another 5% to 10% more. It’ll take a long time to get back to the peak prices we saw in many markets.

A. I would not have done anything different. But I was a public spokesman writing about housing having a good future. I was wrong. I have to take responsibility for that.

Or, as Capt. Willard put it in Apocalypse Now: “ The shit piled up so fast in Vietnam you needed wings to stay above it.”

It is clear that telling the truth and leaving out the spin would have served the NAR better. They could have established themselves as a trustworthy source of information. Instead they lived up to expectation as just another generator of bovine fecal matter.

In the end trust is the ONLY thing a brand or product has going for it. Lose that and nothing else matters.