As old friend Laura Browder points out in her book Her Best Shot: Women and Guns in America, weapons makers have a long history of targeting women. Smith & Wesson et al. have been making rifles and pistols with lighter frames, smaller calibers and pink coloration pretty much as long as they’ve been in business. Well everything old is new again in the weapons biz, it seems.

Remington is now selling a stylish package with a pink-grained version of its 870 shotgun and matching hat. While the hat is standard issue, I have to say that from a design stand-point I love the shotgun. Not sure I’m secure enough in my masculinity to bring it along on my once-a-decade skeet shooting expeditions but hey how many people are going to make fun of you if you’re carrying a shotgun — regardless of color?

In case you’re looking for something designed more for personal protection and less for the murder of innocent skeets consider the Avurt IM-5. As Techie Diva notes: 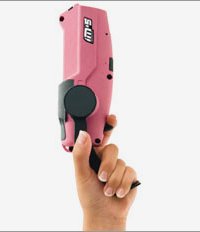 the Avurt IM-5 looks rather harmless at first glance, but it is actually a personal protection device in disguise, boasting compressed nitrogen that can blast out in paintball-like pellets of extremely potent PAVA pepper spray at anyone whom you feel is a threat. Features include a laser sight that help you hit your target even without any training from as far as 40 feet away.

IMHO, I’d rather have something smaller and easier to carry when it comes to pepper spray dispensers. Also I’m not to sure about the effectiveness of these pellets. I want something that can give the offender a snout full of the stuff immediately and not wait for a pellet to break.

(BTW, Staff Sergeant Big Brother Collateral Damage — who has quite the impressive collection of weaponry — says that the feminine touch is very useful in actually camouflaging weaponry. He says diaper bags, the more flowery the better, are a great way to secure your pistols when going to shooting competitions, as he frequently does. At home the weapons are secured in a non-gender-specific locked safe. In case that isn’t enough discouragement to would-be burglars, there’s the fact that the home-owner keeps one of said weapons on him. Another aside: as the larger but younger brother can I just say that giving SSG BB CD fire power is pretty much guilding the lilly. I’m four inches taller at least 30 lbs heavier and wrestled in high school and college. Didn’t make any difference.)