A spokeswoman for the Wall Street Journal said today its cover art was not intended as innuendo about Supreme Court nominee Elena Kagan’s sexual orientation after the paper’s front-page use of an image of Kagan playing softball provoked a mixture of irritation and amusement from gay and lesbian advocates. 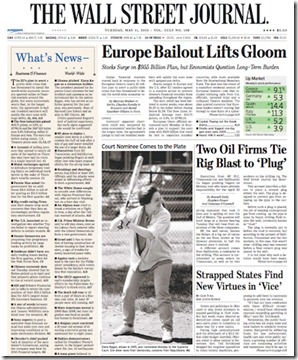 Y’know I always try to read the minutes from the Gay Agenda committee meetings but I must have I missed the one where they announced women playing softball is a code for lesbian. Or maybe it’s just women who play softball well.

Speaking as one of the three people left in the world who still reads the Journal on paper I have to say my reaction to the photo was that it made Ms. Kagan seem really – oh how should I put this … – normal. Just a regular person having fun playing softball. The only thing it made her look like was someone’s kid sister or maybe a co-worker, or maybe both.

Here’s my favorite quote from the Politico story:

"It clearly is an allusion to her being gay. It’s just too easy a punch line," said Cathy Renna, a former spokesperson for the Gay and Lesbian Alliance Against Defamation who is now a consultant.

The only lesbian punch line I know is this, “A U-Haul.” The joke: “What does a lesbian bring on a second date?” Apparently lesbians move in together quickly. If I were to go by the behavior of my friends who are lesbians I would have to say that this is closer to reporting than to humor.

"The question from a journalistic perspective is whether it’s a descriptive representation of who she might be as a judge. Have you ever seen a picture of Clarence Thomas bowling?"

No, but I did see some of former Chief Justice Rehnquist appearing as an extra in an opera (true!), does that count?

“The question from a journalistic perspective is whether it’s a descriptive representation of who she might be as a judge.” What would a picture that does this show? Here’s Ms. Kagan at the grocery store weighing a pound of opinion. Here she is in a hard-hat looking constructionist?

Ms. Kagan’s nomination will not be decided by whether or not she is a member of the Not That There’s Anything Wrong With That party. This is really too stupid for anyone to waste their time on. Get back to work getting rid of the Defense of Marriage Act. That actually matters. 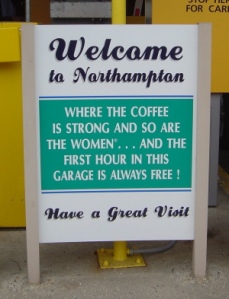 Silly, Rabbit. Everyone knows lesbians are from Northampton.