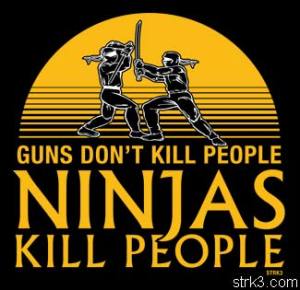 Nine ninjas have been sent to Honolulu to lure visitors from Japan. No, I am not making this up. The stealthy killers were hired by Hawaii Tourism Japan and come from Iga City, a castle town in Japan which apparently specializes in all things related to the ninja art.

Officials said it was the first time the ninja group has come to Hawai’i to promote a historically accurate depiction of a Japanese art popular in Hawai’i and worldwide. The tourism authorities emphasize that this ninja group is faithful to the ancient traditions. The black-clad specialists show off skills in swordplay, sickle work, juggling, throwing stars and even “piercing objects with flying chopsticks.”

Who knew that “piercing objects with flying chopsticks” was part of the ninjitsu tradition? Equally obscure is why Japanese would be lured to Hawaii by the chance to see something developed and practiced in their backyard. Would people from Illinois come to Hawaii for the chance to see one of their corrupt (redundant?) politicians take a bribe?

Related — and true — story: Friend of mine got a call from kindergarten her daughter was attending. Seems the teachers were concerned because the little girl kept insisting her father was a ninja. When told this issue of lying was a problem the friend replied with complete accuracy, “Her father teaches ninjitsu — what would  you call him?”

I would call him “sir” unless told otherwise.

China‘s Shaolin Temple, the cradle of Chinese kung fu, is demanding an apology from an Internet user who said its monks had once been beaten in unarmed combat by a Japanese ninja.

Hell guys, walk into any biker bar or dungeons & dragons game on a Friday night and you’ll hear at least two guys claiming they beat you AND a ninja.

The real question is could they beat a pirate?