While we here in the U.S. have been watching Congress battle over who gets to shoot the U.S. economy in the foot, the heat has risen under Europe’s financial crisis and it is now once again at full boil. The result could be a mess big enough to make people wonder why there was so much fuss over sequestration.

On Tuesday Italian voters, grown tired of austerity measures which made the nation’s economy worse, were offered a choice of political leaders seemingly borrowed from a Marx Brothers’ movie and in their infinite wisdom elected all of them. The resulting stalemate has many analysts thinking that a default is a possibility again.

“The inconclusive outcome of the Italian election looks set to prompt a renewed bout of market pressure which may eventually force Italy to request a support package from the euro-zone,” writes Ben May of Capital Economics.

The fear is that already skittish investors will demand Italy pay more interest in order to borrow the money it must have to pay its bills. If that cost gets too high then Italy would have to seek some form of financial help from the European Central Bank. In the worst case scenario that help means a bailout and because Italy is the world’s 11th largest economy, it is far, far too big to bailout.

It is also possible investors might be fine with the current situation. As the Wall Street Journal noted, “Italy has never been known for strong governments so arguably not having one at all is a natural state for foreign investors.” While the interest rate on the Italian 10-year-bond has risen since the election took place right now it is around 5 percent, well short of crisis levels.

However, it is very hard to find an analyst who thinks this is likely to continue.

“With political chaos likely to be the prevailing wind in the next few months, our pre-election view that Italy could be in play in again with regards to the sovereign debt crisis is beginning to unfold,” says Raj Badiani, an economist with HIS Global Insight. “As expected, the general election has thrown up a substantial no-confidence vote on the current austerity plan and the need to reform further.”

It is not easy to explain how Italy got to this point. Like a great comic opera, the path to the current stalemate contains far too many improbable plot twists and outrageous stunts for even a quick summation, so let’s just focus on the election itself.

It came about after the resignation of Prime Minister Mario Monti who was appointed to the position in 2011 following the resignation of Silvio Berlusconi, a tycoon who owns most of Italy’s major media outlets, is about to face trial for allegedly having sex with an underage “night-club” dancer and has been sentenced to prison for tax evasion. None of that has anything with why he resigned, by the way.

Also, none of that appears to have hurt him at the polls as much as you might expect. His People of Freedom Party and its allies got 29 percent of the vote, which put him in a virtual tie with Pier Luigi Barsani of the Democratic Party and its allied parties. Coming in third with 25 percent was the 5 Star Movement Party which is headed by an acknowledged comedian, Beppe Grillo.

Grillo has so far refused to form a coalition with either of the other two and this is unlikely to change as his party is built around his low-opinion of the professional politicians. When Bersani tried to get Grillo to agree to an alliance Grillo called him a “dead man talking” who should resign as leader of his party and stop making “indecent proposals” to the Five Star Movement.

It is worth noting that Italy’s election law is known as the Porcellum, which is Latin for pigsty.

And, just like here in the U.S., all this would be tremendously amusing if the consequences weren’t so very scary.

(A very different version of this originally appeared on CBSNews.com)

What was the theory behind the Glass-Steagall Act? Foremost, it was meant to restore a certain sobriety to American finance. In the 1920s, the banker had gone from a person of sober rectitude to a huckster who encouraged people to gamble on risky stocks and bonds. As [chief congressional counsel Ferdinand] Pecora noted, small investors identified banks with security, so that National City salesmen “came to them clothed with all the authority and prestige of the magic name ‘National City.’” It was also argued that the union of deposit and securities banking created potential conflicts of interest. Banks could take bad loans, repackage them as bonds, and fob them off on investors as National City had done with Latin American loans. They could even lend the investors money to buy the bonds. A final problem with the banks’ brokerage affiliates was that they forced the Federal Reserve System to stand behind both depositors and speculators. If a securities bank failed, the Fed might need to rescue it to protect the parent bank. In other words, the government might have to protect speculators to save depositors.

The repeal of Glass-Steagall was passed by Congress and signed into law by President Clinton in 1999.

The arguments made to repeal the act were primarily

There has been a deliberately high signal-to-noise-ratio ("the ratio of a signal power to the noise power corrupting the signal") around the financial fiasco. The reason for this is the same reason that a magician does patter — to divert your attention from the sleight-of-hand.

We have heard long explanations about how no one could have seen this coming and how we can’t fire the people who got us into this mess to get us out of it and how we are going to borrow our way out of a debt crisis and how the value of loans shouldn’t reflect actual market conditions when the market is a mess. All of which can be translated to, "pay no attention to the man behind the curtain."

I am not sure if this rises to the exact level of a conspiracy or if it just coinciding self-interest by people who stand to lose a lot of money if that curtain is pulled back. I am sure that the effect is the same as a conspiracy.

However, Bill Black thinks it’s a conspiracy and that’s good enough for me. In an interview on Bill Moyer’s show Mr. Black — the senior regulator during the S&L crisis & now a prof of economy and law at U. of Missouri — applies a brilliantly sharp Occam’s Razor to the entire fiasco. In less than half-an-hour he explains what went wrong, why and why what we’re doing won’t work. This is a truly bipartisan dissection. Watch it and learn.

My favorite part is his conclusion (transcript here):

So stop that current system. We’re hiding the losses, instead of trying to find out the real losses. Stop that, because you need good information to make good decisions, right? Follow what works instead of what’s failed. Start appointing people who have records of success, instead of records of failure. That would be another nice place to start. There are lots of things we can do. Even today, as late as it is. Even though they’ve had a terrible start to the administration. They could change, and they could change within weeks. And by the way, the folks who are the better regulators, they paid their taxes. So, you can get them through the vetting process a lot quicker.

"The tragedy of this crisis is that it didn’t have to happen at all." — William Black

This subprime primer was forwarded by my pal Dauber. It is incredibly accurate. If you haven’t yet received it via email you can find the entire thing at BusinessPundit or drop me a line and I’ll send you the powerpoint stack. I haven’t found out who did it, but he/she/they is/are a genius (s). 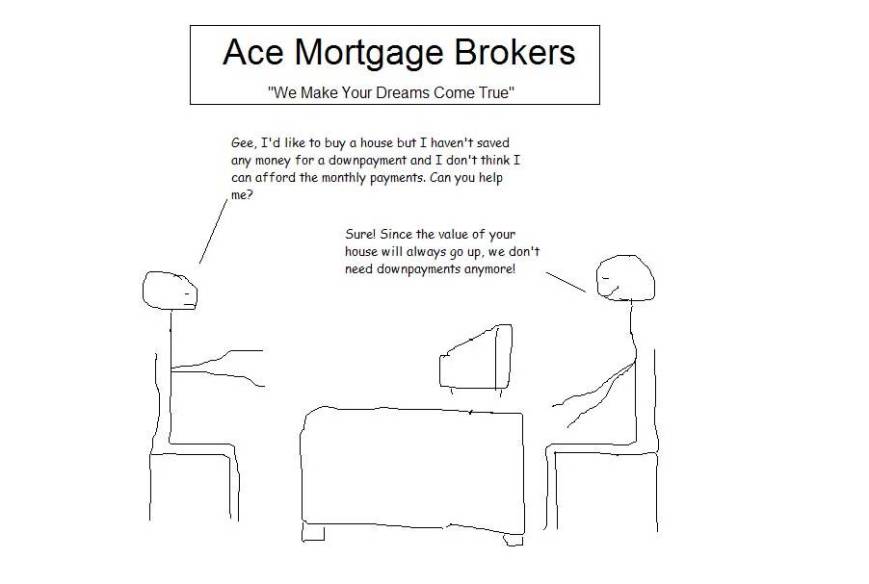