A pink oil delivery truck? Whiskey Tango Foxtrot? I was driving around Boston the other day and I saw one. Then I Googled it to get a picture and found out it was one of TWO local oil companies doing this. Then my friend Karen sent me a link to the pink recycling can. So I thought I’d put together a pictorial guide to some of the odder pink breast cancer items I could find. VOILA!

Ask yourself a question: Do you know anyone who isn’t aware of breast cancer?

Back in the day – in this case the early ‘90s – I had many friends with HIV and/or AIDS. One of whom, a true gentleman named John Kelley, wore on his jacket a Star Trek badge (right) and a red ribbon which many people were wearing then to show they knew AIDS existed. When asked about this heraldry he would respond, “Because Star Fleet cares about AIDS.” (RIP, dear John.) Which is pretty much where I’m at with all the pink that washes over marketing each October.

Let me make one thing very clear: Like everyone else, I know many people who have had breast (and other types of) cancer. One of those is Mother CollateralDamage. So it will not surprise you to learn that I, like everyone else, don’t like cancer. Now plenty of companies have done a lot to help fund research into preventing breast cancer and to them I say, “You may stop reading now.” The other day the family was driving by the HQ of New Balance sneakers and we noticed a large pink ribbon affixed to the building. Mrs. CollateralDamage: “They’ve earned it.”

But the problem is that many companies are now just slapping pink on the product or advertising and claiming they support “Breast Cancer Awareness.” As a commenter on a wonderful NYT column about Pink Ribbon Fatigue put it, “Buying stuff with pink ribbons will send some money to research and/or outreach, but it hard to tell how much that Yoplait helps. Posting ‘awareness’ status updates on facebook does absolutely nothing – I have yet to meet a person that wasn’t aware of breast cancer’s existence."

Here’s what Xeni Jardin said at BoingBoing and I can’t do better (click here if you want to see one of the pictures.):

The December issue of French Vogue, edited by Tom Ford, features an extensive spread of child models presented more or less like whores. The girl above is 6. Lemme spell that for you: s-i-x! I’m a big Tom Ford fan. Or, well, was. Artistic freedom and everything, and no, this shouldn’t be made illegal—but I believe this is Totally Not Cool.

Apparently French Vogue is where they run all the most appalling stuff. They managed to hit #5 on 2009’s list of Top 10 Marketing Blunders with a salute to black-face featuring a photo spread of the very Caucasian Lara Stone painted head-to-toe in dark make-up. Keep up the good work gang! It’s going to take a lot of work to keep them out of 2011’s Top 10. 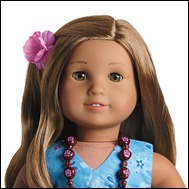 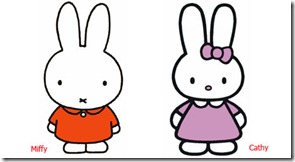 Sanrio has lost a cut of the oh-so-lucrative Benelux market (that’s Belgium, the Netherlands, and Luxembourg, FYI). A Dutch court has ruled that

a minimalist rabbit character dreamed up by Sanrio Co., the Tokyo-based parent company of the Hello Kitty empire, infringes on the rights of her arch-nemesis, Miffy.

Do you love the idea that Kitty has an arch-nemesis as much as I do? A peremptory inspection of the characters appears to support the court’s decision. Given how generic they both look it’s hard for me to believe anyone deserves a copyright here. I mean how many ways are there to draw a cartoon bunny anyway? 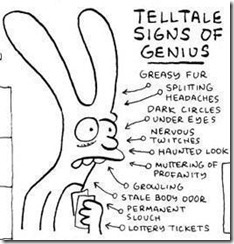 What could be a better way for your child to learn that the homeless are just like real people than to buy her a “less fortunate” playmate for her other American Girl doll(s)?

How about spending some time with — and money for — someone who is actually homeless? 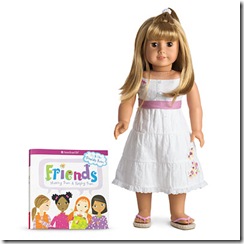 and her mother Janine fell on hard times when her father lost his job; they later lost the house as they were unable to keep up payments. Soon after, Gwen’s father left them and they became homeless the fall before the start of the book’s events. Initially, Gwen’s mother has them live in their car until the winter comes; she then takes them to Sunrise House, a place for homeless women and children. Sunrise House helps them get on their feet and eventually get a new apartment.

Despite this happy ending Ms. Thompson does have a touch of Voltaire’s Candide about her:

Gwen likes to swim. However, she is not a strong swimmer and is sent to work with the 8-9 year olds. She becomes the swim coach’s assistant on the swim team in the second book so that she can participate and learn to swim better. In [the book] Chrissa Stands Strong this makes her the object of cyberbullying.

Poor Gwen should just be grateful she wasn’t made the token cripple as well. Just think how much American Girl could charge for a wheel chair? 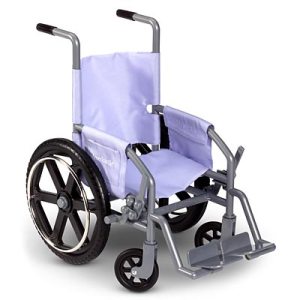 I can't compete with reality.

Even ironistas must do their research. The answer to the above question is $30. Heather, who brought this to my attention and rocks big time, adds  “A set of crutches (with a leg cast and other accessories) is only $26.  You don’t have a daughter….you don’t know!”

Geoff Carter is an excellent and smart writer who, among other things, produces the Disney-centered blog YourSouvenirGuide (but don’t hold that against him). In the post Ten things Disney could have done to geek up without buying Marvel he explains both why Disney buying Spidey was a bad idea and how they could have leveraged the properties they already own.

To my mind, the purchase of Marvel is one of the few missteps the Mouse has made under Bob Iger’s reign. Disney isn’t getting a hell of a lot for its money. The theme park rights to the characters will continue to be held by Universal. And the movie properties .. will remain the properties of Sony, Fox and Paramount for the forseeable future. …. Four billion dollars spent to wait out contracts and to see if Avi Arad and Jerry Bruckeheimer will duke it out in Thunderdome.

9. The Disney Princesses: Teach them kung-fu and arm them with wrist-holstered blades and pistols. 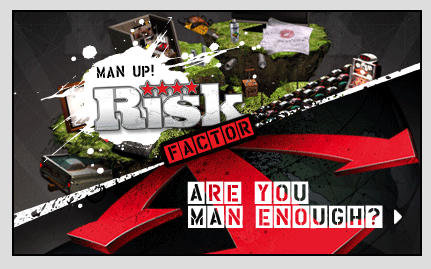 Now I have no doubt that the overwhelming majority of people who play one of my all-time least-favorite board games are — biologically speaking — guys. However up until this point the marketing to guys was more implied than overt. That was a good thing for a couple of reasons. 1) It allowed boys some chance of getting their sisters to play. 2) It didn’t discourage 50% of the population from buying the damn thing.

Anyone who thinks I am reading to much into the “Man Up” campaign should attempt to play the online version “Risk Factor.” It features things like

Oh, no. You are NOT talking about MY mama, are you?

Furthermore, if you sign up to play and do not give a nickname one is assigned to you. But not all nicknames are acceptable as was pointed out in the splendid blog Sociological Images:

I tried a series of names: “Fred”, “Thomas” and “Patrick” went through fine, but if I tried “Melissa” “Jessica” or “Natasha”, the system wouldn’t accept them, and I was told to “Keep it clean, please.”

If you don’t choose a nickname yourself, the system will assign you one. I suppose they are meant to be humiliating names: I got “Bubbles”, “Cupcake”, “Jelly belly”, “Violet” and “Daisy”.

The game platform is a floating island, full of clickable objects. Among them: a facial hair selector, a chainsaw, a TV which exclusively plays footage of girls dancing in a club, a giant finger to pull (which emits gas), etc.

Doubtless Hasbro would defend this all as being meant in “good fun” and bring out the “humorless political correctness” defense. To which I would point out that A) humor is supposed to be funny and; B) The campaign doesn’t work because it’s nothing but tired cliches (which is itself a tired cliche). Hasbro could easily played both sides of the gender fence (and gotten a laugh or two) by using the idea of a tough guy named Bubbles. (And the truly tough frequently do have names like that. When you are tough enough your name is always the same: Respect.)

I think it only fair to note that not playing Risk has been seen as a cause of military blunders. As Prof. Eddie Izzard notes: “In the ’30s, Hitler: Czechoslovakia, Poland, France, Second World War… Russian front not a good idea… Hitler never played Risk when he was a kid. Cause, you know, playing Risk, you could never hold on to Asia. That Asian-Eastern European area, you could never hold it, could you? Seven extra men at the beginning of every go, but you couldn’t fucking hold it. ”

Sadly, Prof. Izzard’s theory was discredited when it was discovered that George W. Bush had played Risk.

A big thanks to Mrs. CollateralDamage for pointing this out.!

There are about a trillion different editions of Monopoly out there all of which appeal to different segments of the population. For ironists there is the Dot Com edition (yeah, I got it). CollateralDamage Jr. owns something like three different Star Wars editions (one of which is a really cool design with place on the board to hold the deeds until you buy them). Apparently the one segment not yet targeted is actually 51% of the population. Thus Monopoly in pink. Ugliest edition ever? You decide. I just hope they gave Mr. Moneybags some gender re-assignment surgery. Hey Hasbro, how about just releasing the Hello Kitty edition here in the US? 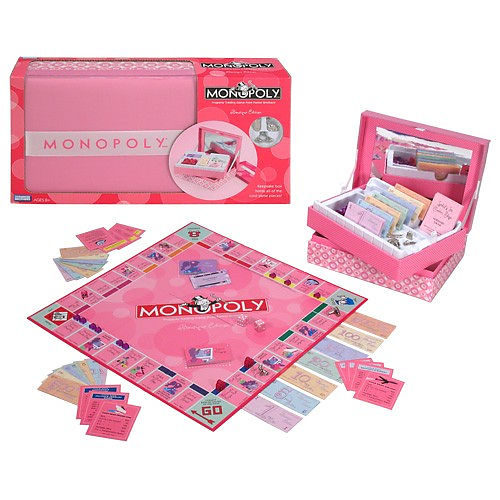