I can’t improve on the actual story: 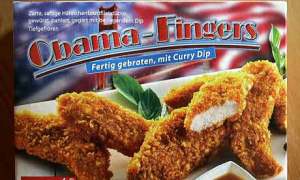 Sprehe, a company that has all manner of frozen delicacies on offer, has come up with a new product it calls “Obama Fingers.” Far from being real digits, though, the “fingers” in question are “tender, juicy pieces of chicken breast, coated and fried,” as the product packaging claims.

“We noticed that American products and the American way of eating are trendy at the moment,” Judith Witting, sales manager for Sprehe, told SPIEGEL ONLINE. “Americans are more relaxed. Not like us stiff Germans, like (Chancellor Angela) Merkel.”

For Americans in Germany, though, there is a risk that the product might be seen as racially insensitive. Fried chicken has long been associated with African-Americans in the US — naming strips of fried chicken after the first black president could cause some furrowing of brows.

Witting told SPIEGEL ONLINE the connection never even occurred to her. “It was supposed to be a homage to the American lifestyle and the new US president,” she said.

Germans continue to navigate race issues like a drunken bull in a mined China shop.

Activists at a conservative political forum snapped up boxes of waffle mix depicting Democratic presidential candidate Barack Obama as a racial stereotype on its front and wearing Arab-like headdress on its top flap. Values Voter Summit organizers cut off sales of Obama Waffles boxes on Saturday, saying they had not realized the boxes displayed “offensive material.” The summit and the exhibit hall where the boxes were sold had been open since Thursday afternoon.

I actually like the idea of Obama Waffles as a satirical product (indeed, I quite like the image of John Kerry endorsing the waffles on the group’s web site). Had the group used a picture of the senator or at least a caricature that looked like him I would have said, “Good on you.” Using a drawing that makes him look like the child of Uncle Ben and Aunt Jemima was just stupid.

Y’know, there are a number of African-American conservatives out there, might be a good idea to recruit a couple.

It is safe to say that the GOP has written off the Black vote for this election — and probably for the foreseeable future. However, for the last eight years George Bush has been doing his best to reach out to the rapidly growing Latino population. Well, the waffles also managed to insult them, as well. On the back of the box, Obama is portrayed wearing a sombrero and serape. There is also a recipe for “Open Border Fiesta Waffles” that can serve “4 or more illegal aliens.” A recipe tip: “While waiting for these zesty treats to invade your home, why not learn a foreign language?”

In this case the foriegn language seems to be courtesy.

(More cheap shots from the Liberal Media:The Army Times takes McCain to task for changing his position on the Army’s Future Combat System — which the paper describes as “over-budget, behind-schedule.” Seems the Senator — back when he was a fiscal conservative — was against it, and against it for quite a long time. His position changed sometime this summer. )