Do you remember the game Colossal Cave? How about

Anything? (If you’re under 30, ignore this question.) You may also know it as Colossal Cave Adventure or even Adventure. Colossal Cave was one of the first (if not THE first) of what are known as text-based adventure games. Created back in the ‘70s, these games were at one time the cutting edge of computer gaming and the sentences above will cause many an elder geek to wax nostalgic about evenings of Doritos® and Tab®. These games used a simple verb-noun parser to interpret these instructions, allowing the player to interact with objects at a basic level, for example by typing "get key" or "open door". Well guess what? They’re making a comeback, digitally and in-person. There’s even a documentary about them.

The ones I have had personal experience with are from Memento Mori Theatricks. As a whole, the series is called Parsely (parse, get it? Of course you did.). Memento Mori has turned these into more of a party game. One person gets the instructions and map and gets to play as the parser (a role that’s more fun than you might think) while the other people take turns giving very simple commands as they try to complete the adventure. I have played with 70+ people (at ConnectiCon) and with two other people while driving in the car, both times it was a hoot.

Around the same time Colossal Cave came out, the print equivalent was coming out in the Choose Your Own Adventure series of books. Each of these books was written in the second-person and at the end of each page the reader was given a choice to make. If you chose A you turned to one page, if B then to another page. The decision tree was seemingly endless and not a few of us didn’t so much play them as just read all the possible outcomes. Edward Packer, the creator of these games, is now updating them for the modern era as iPad/Phone apps called “U-Venture.”

The basic idea of the choose your own adventure books has had a profound impact on the development of PC/Video games. Do a news Google of the phrase and you get a surprising number of results – many from the recent ComicCon. But, if that’s not cutting edge enough for you, consider this headline from TechCrunch: Foursquare’s Next Game: Choose Your Own Adventure?

Additionally there is now a documentary called Get Lamp, about the history of the computer versions. It has a genius tag-line: “Before there was the first-person shooter, there was the second person thinker.” DAMN THE VIDEO CARDS! Yesterday, HERE WE COME!!!!!

I’ve tried to be bipartisan in both my support and bashing of the two presidential contenders but Sen. McCain has just crossed the line. His campaign is trying to say that playing Dungeons & Dragons is a BAD THING!!! In a blog post on McCain’s site some NPC named Michael Goldfarb wrote:

It may be typical of the pro-Obama Dungeons & Dragons crowd to disparage a fellow countryman’s memory of war from the comfort of mom’s basement, but most Americans have the humility and gratitude to respect and learn from the memories of men who suffered on behalf of others.

Nor is this the first time that McCain’s campaign has tried to make D&D the equivalent of being called a “pinko.”

In an earlier post Goldfarb described the editors of the NYTimes as having “all the intelligence and reason of the average Daily Kos diarist sitting at home in his mother’s basement and ranting into the ether between games of dungeons and dragons.”

After that first ad hominem attack scads of Wingnuts stood up and proclaimed that they too were out and proud about playing D&D.  Mr. ‘Farb responded to one of them (Ace of Spades) with the following:

If my comments caused any harm or hurt to the hard working Americans who play Dungeons & Dragons, I apologize. This campaign is committed to increasing the strength, constitution, dexterity, intelligence, wisdom, and charisma scores of every American.
–Michael Goldfarb

Not surprisingly Mr. Spades is now doubting the sincerity of that apology.

I think there is more outing to do here. I think that Mr. Goldfarb is covering for the fact that he, too, is or was a D&D player. This fits 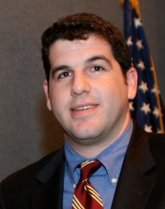 into the classic behavior pattern of closeted homosexuals joining with gay bashers in an attempt to deny their own behavior. It is time for some enterprising journalist to get their hands on a copy of Mr. Goldfarb’s high school yearbook and start making some calls! C’mon, doesn’t this look like the face of someone who cried when his 10th level magic user died after failing to check for traps? I find it difficult to believe that this man has NOT spent many Saturday nights playing with his 20-sided dice.

Gotta say Mike, Dungeons & Dragons is not going to be the next “limousine liberal” or “brie-eating” in the political lexicon. This is especially poor timing given that the pale and the (usually) dateless like myself are still mourning the death of Gary Gygax.

Mr. Mencken’s quote was never more apropos: “The whole aim of practical politics is to keep the populace alarmed (and hence clamorous to be led to safety) by menacing it with an endless series of hobgoblins, all of them imaginary.” I wonder how many attack die that hobgoblin gets?

China‘s Shaolin Temple, the cradle of Chinese kung fu, is demanding an apology from an Internet user who said its monks had once been beaten in unarmed combat by a Japanese ninja.

Hell guys, walk into any biker bar or dungeons & dragons game on a Friday night and you’ll hear at least two guys claiming they beat you AND a ninja.

The real question is could they beat a pirate?