MEDIA ADVISORY, April 20 /Christian Newswire/ — In a book released today, on Hitler’s birthday, Author Joe Keysor combats the growing charge that Christianity fed the Nazi purge of the Jews and Hitler’s hatred in his book "Hitler, the Holocaust, and the Bible: A Scriptural Analysis of Anti-Semitism, National Socialism, and the Churches in Nazi Germany."

Many Christians are unaware that their faith is being painted more and more as the reason for Hitler’s hatred for the Jews and the cause of the Holocaust. "New" Atheists like Richard Dawkins and Sam Harris are doing their best to depict all religion as dangerous and Christianity included. Other secularists have continued this train of thought by asserting that Hitler was a Christian.

As a part of a select group of media purchase influencers, we will pay you $20.00 in return for completing our Media Influencer Survey. You will also receive special highlights of the results after you finish the survey. It’s our way of thanking you for your participation. We’ll also send the Advertiser Optimism Report to your email, which includes study results from the most recent wave of our bimonthly tracking study. The survey should take less than 30 minutes to complete.

If I’m influencing anyone to purchase any media they really need to look for a new line of work. Maybe I have a reverse influence — “well, if he hates it it’s got to be popular.”

The “Advertiser Optimism Report”? They’re going to send me a blank email?

Billionaires, Multi-millionaires & Real Estate Gurus & experts have joined together to help one another and make more money than ever. Lawrence “LG” Loik, the president & founder of The Real Estate Investor Network states that “these entrepreneurs & experts want to give back to society” and are showing anyone from any economic environment how to “get back on their feet & beat the recession.” Loik announced the opening of the “SuperCamp Series” in Los Angeles on May 2-3. The Official name is, The Deal Maker Summit & Masters of Real Estate Marketing SuperCamp.

They want to give back to society by taking money from it.

One of the speakers: Donald “King of Bankruptcy” Trump. I’d rather listen to Rick Wagoner.

This is from The Waffle Group blog — where it really is all about the syrup:

Honestly, that really is the headline. Holiday Cheer on a Budget! With Microsoft Products! Now in Spanish!

It’s either satire, or Microsoft are using their system administrators to write press releases.

Damn! Wish I’d found this first. You really owe it to yourself to read the rest of the post.

Zoo Atlanta wants there to be no doubt that they’ve got an important knocked-up panda on their hands — that’s why they doubly confirmed it in a release announcing the pregnancy of 11-year-old giant panda Lun Lun:

The confirmation of today’s ultrasound is a confirmed indication that birth is eminent!!! 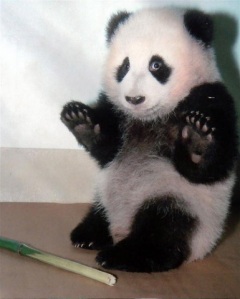 OK, it would be far too easy and cheap a joke to say that only in Atlanta is a pregnant 11 year-old viewed as a good thing. So I am not going to make that joke. Nope. Won’t do it.

In addition to finding out that a panda birth is eminent, the release also contained this nugget of information:

In late July, Lun Lun began demonstrating a sharp decrease in appetite, followed by lethargy, somnolence and withdrawn behavior – all normal and expected patterns for a female giant panda experiencing either pregnancy or pseudopregnancy.

Also normal and expected patterns for 45-year-old bloggers before their first cup of coffee.

Many thanks to devoted reader isisinator for sending this along. If you should come across any impressively bad press releases please send them to cvon ((at)) areporter ((DOT)) com.

For another beaut check out this one that my ol’ buddy Rob found. It starts: In the newly released benchmark report, Application Security: Protect Sensitive Data while Improving Compliance, Aberdeen Group, a Harte-Hanks Company (NYSE:HHS), found that on average, Best-in-Class organizations …

and that’s just the first half of the first sentence.

It’s everywhere! You read the blogs, see report after report… Romantic Apathy is running rampant and it’s affecting Christian relationships all over the world. It’s bursting through on televisions, creeping in by email, and now, cell phones make it even easier to whisper words of love without ever having to look into each others eyes.

Noticing the trend, Guy Bickel, the originator of a unique Christian CD for romantic enlightenment entitled The Original Love Song, references a recent blog article entitled ‘Romance in the Age of Irony’, where Urban Survivor writes: “Love in the 21st Century is a joke… it’s a punch line in a sitcom. It’s an e-mail with a lame smiley face in place of an original phrase. It’s a hasty text message (LUV U) with a hieroglyph where your heart ought to be.”

BTW, I am starting an effort to amend the constitution to raise the age of irony to 40.

Error: Twitter did not respond. Please wait a few minutes and refresh this page.